Packet Coalescing Reduces Packets per Second up to 99%

Adding packet coalescing to your network can reduce the packets per second (PPS) that your satellite modem must handle by up to 90%. That is 10 packets are combined into a single packet before being sent to the satellite modem. If your application, like Skype from multiple users, normally needs 500 packets per second, packet coalescing can reduce this to 50 PPS. Coalescing also reduces the number of acknowledgements on the return path for TCP traffic, freeing up bandwidth for additional data throughput. Proper implementations of packet coalescing use a very lightweight wrapper, correctly mark the packets to adhere to the original packets DSCP marks and use multiple queues, one for each DSCP class to avoid mixing of traffic with different QoS requirements.

How does Packet Coalescing Reduce Packets per Second?

Satellite modems are designed to transfer voice and data traffic over the satellite links as reliability and efficiently as possible. Modems do a fair amount of IP processing, however trade-offs are made to keep the cost of the satellite modem low. One trade-off that is impacting many satellite network service providers is packets per second (PPS) performance of the modem. This limitation is most noticeable as the amount of voice and other small packet traffic grows on the network. There are two primary techniques to optimize this small packet traffic, Packet Coalescing and Robust Header Compression (ROHC). I will discuss packet coalescing in this post leaving ROHC for part 2 of a 3 part series. 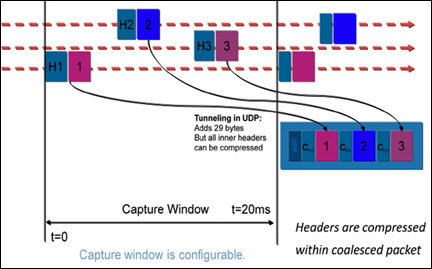 Packet coalescing works on both UDP and TCP traffic taking small packets and grouping them into larger packets, reducing PPS up to 99%.  ROHC is commonly used with VoIP traffic, therefore it must be implemented with a tunable capture window size to prevent additional delay or jitter. Figure 1 shows how packet coalescing and ROHC work together to create full size packets from smaller voice packets. In this graphic you see that there are 3 voice calls running over the WAN link.On either side of the link is a WAN Optimization device that supports packet coalescing, like the XipLink XA line of WAN Optimization Appliances. The first device takes the regular data flow and coalesces the packets from multiple streams into a single packet. After traversing the WAN link, the remote side WAN Optimization Appliance takes this combined packet and unbundles the connections so that they can be routed to the appropriate destination.

Since a robust implementation of packet coalescing must participate in the networks qualify of service scheme, a different coalescing queue is set up for each DSCP Class. For example if you have Skype running over TCP, Cisco VoIP running over UDP, and video surveillance running over UDP you will most likely define 3 QoS levels to deal with this traffic. In the case of XipLink’s packet coalescing technology, 3 different packet coalescing queues are established over the satellite network to ensure that each traffic class maintains the correct QoS settings. This prevents a burst of activity from the surveillance video from impacting the VoIP traffic that will probably be a higher priority than the video.

A configurable capture window allows the network administrator to maintain an acceptable level of delay and jitter for voice users. Once the coalescing queue is established it will start to fill up with small packets until one of two events happen, the capture window timer expires or  the coalesced maximum packet size is reach. The packet is sent when either of these two events occurs. The coalesced packet is a standard, routable packet which can transverse any network.

In Figure 2 we take a look at how VoIP calls impact the number of packets per second transferred over a network before and after packet coalescing. In this test, a single call generates 50 PPS.

Sending VoIP calls through a bandwidth optimization device that have efficient packet coalescing algorithms you can get benefits from as little as two calls from packet coalescing. As the number of calls go up, the bandwidth required by all the VoIP calls increases, however, the number of packets used for voice calls stays static up to about 50 VoIP calls. This allows the service provider to deliver 50 calls at the PPS cost of 1. Combining this with Robust Header Compression gives an optimum solution for providing high quality, low network impact VoIP.

Packet Coalescing can reduce the number of packets per second going over your satellite modem allowing you to significantly increase the number of voice calls your network can support. Combined with ROHC, it is an effective means of WAN Optimization when implemented properly.
The key features to a strong implementation of packet coalescing are:

This site uses Akismet to reduce spam. Learn how your comment data is processed.